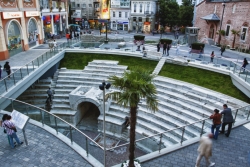 The Ancient stadium of Philippopolis was built in the beginning of the II century A.D. during the reign of Emperor Hadrian. Situated between the western slope of Taximtepe and the eastern slope of Sahattepe, it is one of the most imposing buildings in the city during this period. With approximately 240 m of length and 50 m of width, the stadium could seat up to 30 000 spectators. The spectator seats are tiered in 14 rows, crossed by stepped aisles reaching the track. The seats are made of white marble and some of them are decorated with stylized lion paws. Today only the northern part of the stadium (the sphendone) is accessible, after it was unearthed in the 70s of the 20th c.