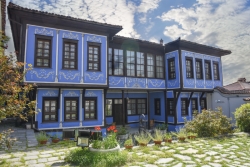 Built in 1834-35 by unknown master-builders, the House of Stepan Hindlian is one of the few symmetrical houses, preserved in their original. Its owner founded one of the four most well-to-do Armenian families in the city of the hills. He was a renowned merchant, whose trade led him often to India in the early 19th c. In result, the new name Hindlian was given to him.

The house is second to none as regards its artistic and decorative ornamentation. Lavish details cover the walls and the ceilings. Two artist painters, known for their talent, authored the decoration. One of them was reportedly of Italian descent. The painting of the wall details on the first floor was carried using for the first time the paper stencil technique.

The first floor features a bath crowning a tradition started with the Roman hypocaust system and developed into the Turkish bath variant with its unwinding steam room.

A steep inner staircase leads to the second floor, where the spacious hall, known under the Turkish word hayet, features a fountain let in the past pour rose water. The wall decorations abound in intricate geometrical, architectural and floral motifs and landscapes. Some of them depict views of Saint Petersburg, Stockholm, Lisbon, Athens, Venice, Alexandria and Constantinople.

The service wing – a kitchen, laundry, rooms for the servants, is not part of the main building. The storeroom, the maaza, is a two level separate stone building meant to safe-keep all the objects of value of the owner. The storeroom gate is crowned by a decorative mural painting, representing the blue facade of the house, a plan of it per se. Similarly, the facade of the service wing appears above the door of the kitchen.