41 years since the opening of the Ancient Theater 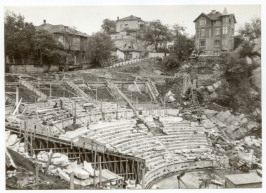 On October 18, 2022, we celebrate 41 years since the opening of the Ancient Theater in the city of Plovdiv.
Archaeologists accidentally came across the magnificent cultural facility in 1967 during the digging of the tunnel under Jambaz Tepe, one of the main transport links in the city of Plovdiv today. It turns out that the theater is located right above the tunnel.
In 1981, the theater was opened for modern use on the occasion of the 1300th anniversary of the founding of the Bulgarian state with a performance of the play "Medea" under the direction of Luben Groys and with Tsvetana Maneva in the lead role.
On this day, OI "Ancient Plovdiv" congratulates all citizens and guests of Plovdiv and invites them to visit the Ancient Theater - one of the pearls in the crown of the oldest living European city.